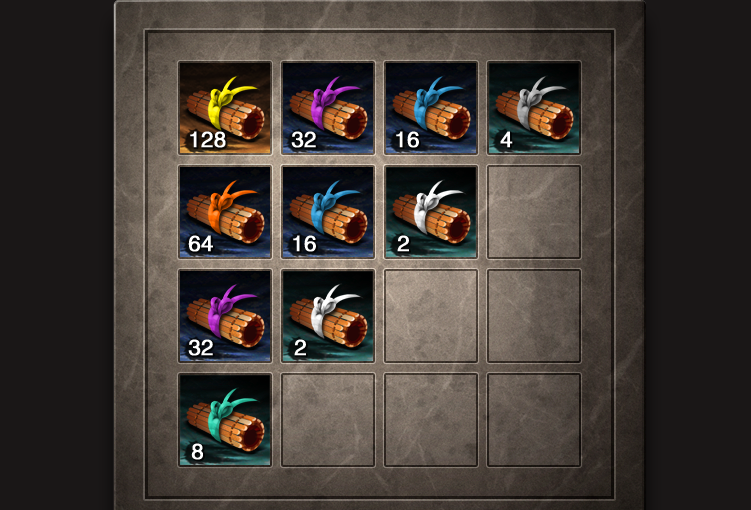 I turned a minigame in Age of Wushu into a web-based version. You can find it here: https://9yin.ersan.io/1024/ and the source code here: https://github.com/Ersanio/9yin-1024

In Age of Wushu, there’s a weekly quest called “Compile the scripts”. It features a minigame where you have to compile scripts until you have either 128 or 256 scripts, depending on the difficulty of the quest. One look at the minigame and you can already see that it’s actually a clone of a certain game.

Even though I am familiar with this game, I never really was interested in going all the way to 2048. It’s just not my type of game, to be honest. I just play it because the quest rewards benefit me. During the gameplay, I just repeatedly mash the left and up buttons to speed through the quest, as it requires me to reach 128/256 only.

Some people thought otherwise. So far I’ve had 4 friends independently expressing their admiration for this minigame and how it’s more fun compared to the other tedious quests. Some already know that it’s based on the 2048 minigame, but they still like the overall “Age of Wushu” theme of it. It was actually a bit sad to think about. My friends are limited to playing the game twice a week. They have to actually log into Age of Wushu to play it. The game won’t even let them go all the way to 2048. So I decided to take matters into my own hands and make my own web-based version of this minigame.

I decided to make the application in Angular, as it ties in neatly with my wishlist of programming languages and frameworks I’d like to learn. This will be my second Angular application (the first one I will blog about in the next post #foreshadowing). Building the user interface was actually easier compared to programming the game logic.

I decided to add support to both desktop and mobile. To do this, I first set the viewport size to 0.5, else the game’s grid asset wouldn’t fit on mobile. Doing that caused inconsistencies when it came to font size styling however, so I decided to be less lazy about it. After making use of CSS variables and the calc() function, I made it so that the assets scale depending on a single scale variable. On smaller screens, the variable is set to 0.5 – halving the assets in image size. On larger screens, it’s set to 1 – the original image size of the assets.

I also made a single “spritesheet” asset of the tiles, as using a separate image for each tile value would sometimes cause the tiles to have delays when appearing into the game. This was especially true for tiles that weren’t loaded in the game before and appeared just then. This spritesheet approach also taught me about the Math.log2() function which turned out to be extremely useful for this project.

This was the tougher part of the game, as I actually had to figure out how the game’s rules exactly worked. I couldn’t really find any specifications for the 2048 game, so I had to play around with the game, to figure out the following rules. The most important of them are:

After a lot of sketching I started to see a pattern.

After that, it was just a matter of putting that pattern into code. It’s a bit hard to explain, but it basically boiled down to processing the tiles column by column based on the direction and applying above rules to each column. To be extra sure I got the rules right, I also wrote unit tests which test if the resulting grid is correct after a certain move.

I added mobile swiping support by using HammerJS. To implement this, I had to do the following:

After that, I could simply add event handlers in the .html and .ts files, such as (swipeup). I had to add extra configuration in order to add support for swiping in all directions, as it doesn’t support vertical swiping out of the box. You can find it in HammerConfig.ts.

I also made use of the browser LocalStorage to keep track of the player’s (high)score and the current state of the game. The player can leave the game at any time they want; when they return to the game, they can resume where they left it off.

Making this game for the web was a nice practice for me especially when it came to implementing mobile support. With a single library, I could implement mobile gestures and I can see this experience being useful in the future.

Implementing the game logic was especially challenging considering I sort of reverse-engineered the gameplay based on my observations. Admittedly I did look at existing source code on sites like codepen, but seeing how everyone had their own implementation, I wanted to have my own original approach as well.

Unfortunately the game is lacking in animations right now compared to that original 2048 game. Maybe it’s something I’ll work on in the future.

But hey, at least, now my friends can enjoy their Age of Wushu-themed 1024 game!